You are here: Collection > Photographs > Ships > VICEROY OF INDIA at anchor 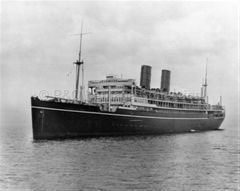 VICEROY OF INDIA at anchor

Description:
VICEROY OF INDIA (1929) was the first European-owned turbo-electric vessel giving greater smoothness and better fuel consumption. She used 20 fewer engineroom staff than a conventional oil-burner of the same size, 100 less than a coal-burner. All cabins were single berths with interconnecting doors, with extra rooms for ‘ayahs’ accompanying families. The interior decoration of VICEROY was entrusted to the Hon Elsie Mackay, youngest daughter of Lord Inchcape, the then P&O Chairman. The public rooms were luxuriously furnished incontrasting historical styles and VICEROY boasted the first internal swimming pool in the P&O fleet.

Showing 1 comments about this object