You are here: Collection > Photographs > Ships > RAWALPINDI as an Armed Merchant Cruiser 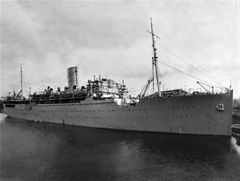