You are here: Collection > Photographs > Ships > VASNA at sea as a Hospital Ship 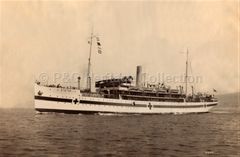 VASNA at sea as a Hospital Ship

Description:
VASNA (1917) was utilised as ambulance transport ship when she entered service at the end of the First World War. In the Second World War she was the first British Hospital Ship to berth in Japan after VJ day and was used evacuate POWs to Sydney.

Showing 2 comments about this object