You are here: Collection > Photographs > Ships > EMPIRE SEABRIGHT in harbour 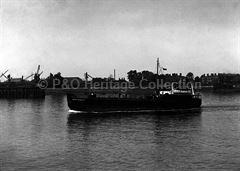 Description:
EMPIRE SEABRIGHT was completed in 1945 for the Ministry of War Transport. She was later acquired by GSNCO. and renamed ORTOLAN in 1951.