Operator of coastal, short-sea and ferry services in the UK and to the near-Continent and the Mediterranean, and excursion steamers on the Thames

In 1821, a group of London businessmen including W J Hall, a shipowner, and Thomas Brockelbank, a timber merchant from Deptford, agreed to form a syndicate to develop steamship services.  Their first steamer was the James Watt which inaugurated their London to Leith service in 1821.  Also running at that time, between London and Margate, was Brockelbank’s own Eagle, the first in a long line of Thames paddle steamers to bear this name.

In June, 1824, the group recommended the ‘immediate establishment of a joint stock company for navigating by steam’.  As a result, the General Steam Navigation Company was incorporated by an Act of Parliament with a nominal capital of £2 million.  Its founders intended to establish world-wide shipping links, and the company’s house flag therefore centred upon a globe, but these ambitions were subsequently revised, and in the end GSN’s operations rarely moved beyond the UK and near-Continental trades, and the Mediterranean.  The company distinguished itself as the first British company operating a steamer service to foreign ports, and the earliest steam-ship undertaking on the Thames. 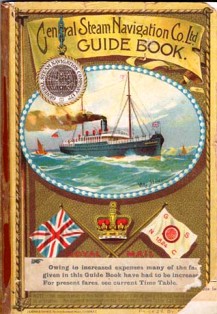 GSN was at first confined to the passenger business, most notably the London to Margate service which became immensely popular and for several years the annual number of passengers exceeded a million.  It was not until the late 1820s that GSN applied to the government for permission to transport cargo, whereupon they moved into the carriage of live cattle and sheep from the Continent, a trade upon which much of its prosperity was to be founded in the 19th century.

In addition to GSN's routes already in existence between London, Hull, Leith, services to Ipswich, Newcastle, Sunderland and Berwick were added.  Before long, regular services were opened up between London, Hamburg, Rotterdam, Antwerp, Ostend, Calais, Boulogne, Lisbon and Gibraltar and from Brighton to Le Havre and Dieppe.

By August 1825, GSN possessed a fleet of 15 steamers that were built on the banks of Deptford Creek and they had also purchased the old East India Company depot there, turning it into a yard for the maintenance and repair of its vessels.  By 1833 the company was carrying mails from London to Hamburg, Ostend, Boulogne and Rotterdam.  In 1834 they obtained a further Act of Incorporation which enlarged its operations on these services.  In 1836, GSN further expanded by acquiring the business of the London and Edinburgh Steam Packet Company, consisting of six steamships, premises and warehouses, and at about the same time, the steamships of a rival Thames company, the Margate Steam Packet Company, were also purchased.  By the time The Peninsular and Oriental Steam Navigation Company (P&O) received its Royal Charter at the end of 1840, GSN already owned 40 steamers employed on its various foreign services and home trades.