In 1887 London shipbroker and coal exporter, Frank Clarke Strick (1849-1943) purchased a small steamer.  He founded the London and Paris Steamship Company Limited to raise capital and the Anglo-Algerian Steamship Company Limited to operate the ship.  It began a pattern of cargo trading which lasted for many years and carried coal from the UK to West Italian ports, and iron ore from Benisaf in North Africa to the United Kingdom or the Continent.

A successful voyage to the Persian Gulf in 1892 with coal and general cargo induced Frank Strick to enter the Gulf trade through a new company, the Anglo-Arabian and Persian Steamship Company Limited.  A specialist concern, the Dwina Ltd, operated a lightering service to enable ships to pass over the bars in the Shatt-el-Arab waterway up to Basra.  By the beginning of the twentieth century, Strick had 15 ships sailing under his flag, primarily in the Mediterranean and Persian Gulf trades.

From 1903 the Anglo-Arabian and Persian company operated jointly with Bucknall Steamship Line (later Ellerman & Bucknall) carrying oil prospectors’ equipment, stores and personnel to the Gulf.  In 1910 Strick opened offices in the Gulf through a partnership, Strick, Scott and Company.  In 1913 the Anglo-Algerian company, now solely involved in the Gulf trade, was renamed Strick Line Ltd.  World War I saw a significant reduction in trade in the Gulf and the greater number of Strick Line's ships requisitioned for war duty.  Losses were heavy and the fleet emerged from the war sorely depleted.  The high cost of replacing ships and Strick's advanced age compelled him to sell his fleet and business (but not the original ship management company, Frank C Strick & Co) to Lord Inchcape’s company Gray Dawes & Co in 1919.

In a new venture, Frank Strick formed the London, Paris & Marseilles Steamship Company in 1920 (later London & Paris Steamship and Investment Co Ltd) while also continuing to operate the La Tunisienne Steam Navigation Company Ltd which he had established in 1909 to serve on the North African trade. 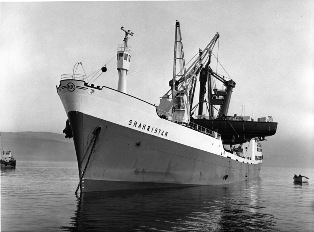 By 1928, Mr Strick (although always involved) wished to re-acquire an interest in the Persian Gulf trade and in the company which bore his name, and negotiated with P&O the purchase of a 49% minority interest in Strick Line (1923) Ltd using the name of his London & Paris Steamship Company set up in 1909.

Upon the outbreak of the Second World War the Strick Line ownership of twenty-five ships was divided into three fleets - Strick Line, La Tunisienne and Cory & Strick, a joint venture with William Cory & Son.  During the war Strick Line built eight vessels but twenty vessels were lost and Cory & Strick was wound up.  In 1960 Strick Line acquired Frank C Strick & Co Ltd, independent management of Group ships being no longer considered appropriate by P&O, and in 1972 P&O reacquired the Strick minority interests and absorbed the Strick fleet and operations into the P&O General Cargo Division.

Records relating to Strick Line and all associated companies have been deposited on permanent loan by P&O to the National Maritime Museum, Greenwich.  They consist largely of minutes of the Board of Directors’ and general meetings, accounts and a small number of letter books.  For a complete list of the material held at the Museum, it is recommended that you consult the NMM catalogue directly.