Operator of passenger and cargo services in Indian waters, the Bay of Bengal, the Gulf and to Japan, Australia and East Africa as well as ‘Home Lines’ from the UK

The founder of the British India Steam Navigation Company (BI) was William Mackinnon (b.1823-d.1893) who, in partnership with William Mackenzie (ca.1810-d.1853) operated as a general merchant near Calcutta.  In the mid-1850s Mackinnon, Mackenzie & Company secured the East India Company's mail contract between Calcutta and Rangoon and founded the Calcutta & Burmah Steam Navigation Company Ltd, registered in Glasgow in 1856, with a capital of £35,000.

Within five years of its foundation, the company had expanded considerably: from Burma, its ships were serving Penang and Singapore, while dozens of small ports along the Indian coast were being opened up to large-scale traffic by its service between Calcutta and Bombay.  A mail contract to cover the whole of this route was being negotiated, and a similar contract up and down the Persian Gulf was being contemplated by the Government.  In 1861 Mackinnon raised £400,000 to establish the British India Steam Navigation Company Ltd, and ordered six larger ships.  The new company, which absorbed the Calcutta & Burmah Company, was registered in Scotland in 1862.

The original Mackinnon, Mackenzie & Company in Calcutta continued to exist and operate as BI’s managing agents, a function which they were to fulfil for nigh on a hundred years.  BI secured a network of mail contract services – Bombay/Karachi, Bombay/Gulf, Bombay/Calcutta and Madras/Rangoon – which became the backbone of its operations.

Until the opening of the Suez Canal in 1869, BI operated exclusively in eastern waters, and thereafter the larger part of its fleet was employed in 'foreign-to-foreign' trades.  BI developed a distinctive organisational structure with the Calcutta Office having wide decision-making powers as managing agents and operators of the Eastern services.  On the next level were the principal agencies at most of the main ports (either branches of Mackinnon Mackenzie or affiliated to them) each having a large number of smaller independent agencies.  In addition there was a network of company-owned repair facilities at Garden Reach Workshops in Calcutta or Mazagon Dock in Bombay where all but the most complicated repairs and overhauls were carried out.  There was a board of Directors in the UK and the Company Secretary, based in Glasgow until 1892 and thereafter in London, was the liaison between them and the management in Calcutta. 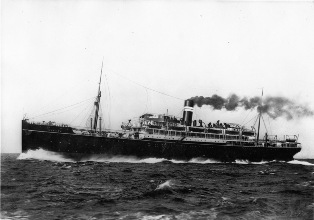 BI’s progress in the next decade was further eastwards.  Entry into the Dutch East Indies internal trade was achieved by the formation in 1865 of a Dutch flag company, the Netherlands India Steam Navigation Company and a connection with China was made in 1868, in conjunction with Messageries Maritimes of France.  There was also westward expansion, BI taking a share of the Moslem pilgrim traffic to Jeddah from 1869 and later carrying P&O mails, passengers and cargo from Aden to Zanzibar.  The first 'Home Line' (in BI parlance a service to and from the United Kingdom) was inaugurated in 1874, to take advantage of the opening of the Suez Canal.  The service was a four-weekly one, from London to Aden, Karachi and the Gulf.  A second such line, from London to Calcutta by way of Suez, Colombo and Madras, was established in 1876.

From the earliest days of their partnership, Mackinnon and Mackenzie had traded with Australia, but not until 1881 was a mail contract arranged with the Queensland Government, although it lasted only until 1895.  BI ships on the Australian run were operated under the 'British India Associated Steamers' name, to differentiate them from vessels earmarked for the company's main trading routes.  Throughout this period BI had been consolidating its position with the Indian and home governments as a partner in the business of moving troops and military stores by sea.  This partnership persisted to the end of the sea-borne trooping era in the early 1960s, and BI continued to manage some Fleet Auxiliaries until 1970.

BI’s connection to East Africa was formally established in 1890 by a regular service from London to Zanzibar via Aden and Mombasa.  This had political as well as commercial overtones: commercially, Zanzibar was the jumping-off place for the Seychelles, Mauritius and Reunion, for Madagascar via the Comoro Islands, and for Mozambique and Delagoa Bay; politically, the formation of the Imperial British East Africa Company in 1887 was a venture in which William Mackinnon personally invested about a quarter of the capital.  However, by 1895 the company had been bought by the (British) Foreign Office.

Japan was included in the BI itineraries in 1907, when a regular Calcutta/Rangoon/Japan service was started.  Participation in the trade was strengthened in 1912 by the purchase of the Apcar Line, the property of two Armenian merchants and shipowners of Calcutta, who, since 1901, had had a cargo pooling agreement with BI.  Another one of BI’s varied services was the transport of Indian workers from the Coromandel coast to Burma, Malaya, East Africa and Mauritius from 1892 to 1932.  In 1912 the company made a second acquisition and acquired joint control, shared with the Asiatic Steam Navigation Company, of the Bombay & Persia Steam Navigation Company, a significant carrier of Moslem pilgrims on the annual Haj, later the Mogul Line.

On his death in 1893 Sir William Mackinnon was succeeded as BI chairman by James Macalister Hall (1823-1904) and he was followed by his own nephew Duncan Mackinnon (1844-1918).  The appointment in 1913 of James Lyle Mackay (later Earl of Inchcape, 1852-1932) as chairman foreshadowed the takeover of BI by P&O in 1914.  Within a year of the takeover, Inchcape had succeeded Sir Thomas Sutherland as chairman of the joint P&O/BI Board of Directors, a post he retained for 17 years.  Throughout his tenure, Inchcape was careful to maintain a great degree of autonomy for BI, which kept its own strong characteristics and traditions until the complete absorption of P&O’s subsidiaries into the parent company in October 1971.