After serving as Master in a number of sailing ships employed on the East Indies and Australia trade, James Nourse (1828-1897) commissioned his own ship Ganges to be built in 1861 and to operate on the same trade routes.  By 1865, Nourse had built up a fleet of sailing vess

els, both new and second-hand, for the transport of contract labour between India and Guiana, the West Indies, Natal and Fiji.  Nourse’s sailing ships earned a reputation for healthier than average voyages in a trade notorious for passenger mortality rates.  There were, of course, return voyages for those people who wished to be repatriated to India.  Carrying cargo was a secondary consideration, but rice and gunny bags were carried from Calcutta and rice from Rangoon to the West Indies, sugar from the West Indies and Cuba and grain or case oil from the United States to Europe, and iron rails and salt from England to India.

After Nourse’s death in 1897, the fleet was operated by his executors until 1903 when a limited liability company was formed under the title of James Nourse Limited.  The sailing ships were gradually disposed of and replaced by six steamships specially designed for the trade, and named like their predecessors after Indian rivers.

In November 1917 shares in James Nourse Ltd were acquire 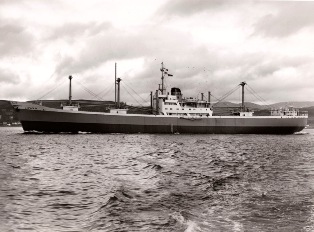 d by P&O instigated predominantly by Lord Inchcape, with the actual ownership of the shares passing into the hands of mainly P&O/BI Board members although Nourse's operations remained largely independent under the Managing Director, Mr C A Hampton.  When Inchcape, the chief shareholder in Nourse Line, died in 1932, the majority of the shares were transferred from his estate to BI.

In the period following the first World War, a number of older Nourse ships were replaced by new and larger steamers.  The carriage of Indian labour to the West Indies was slow to resume in spite of the demand for extra labour in the early 1920s.  Cargo became more important and regular monthly sailings were maintained from Calcutta and Rangoon to the West Indies and Cuba via the Cape.  This India/Caribbean trade continued until 1959 when the Nourse fleet turned to world-wide tramping services.  As a logical development, the management and Nourse fleet were merged with that of the Hain Steamship Co Ltd, a much larger tramp operator also owned by P&O in 1964.  The new concern traded as Hain-Nourse Ltd until the re-organisation of the P&O Group in 1971.

All papers relating to James Nourse Ltd have been deposited at the National Maritime Museum, Greenwich.  They are very limited in scope but do contain board minutes, correspondence, ships’ movements and specifications and some sea staff records.  To view the full collection, consult the NMM catalogue online.