Operator of coastal, short-sea and ferry services around most of the British Isles, both in its own name and through a dozen or more well-known subsidiaries.

Coast Lines Ltd of Liverpool was formed by the merging of three companies in 1913, and was known initially by their joint names: Powell, Bacon and Hough Lines.  The name Coast Lines Ltd was adopted in 1917 when the company was taken over by the Royal Mail Steam Packet Company.  After the dissolution of the Royal Mail Group in 1931, Coast Lines became independent once more under the chairmanship of Sir Alfred Read (1871-1955), who had previously been a director. 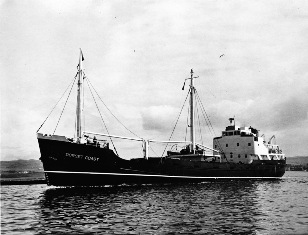 Geographically the Company's activities spanned the whole of the British and Irish seaboard and extending to the Scottish and Channel Islands.  By 1951, Coast Lines had a fleet of 109 ships which carried four million tons of cargo, more than half a million head of livestock and over a million passengers.  It marked the high point in the British ‘internal’ (as distinct from international) cross-Channel, freight and passenger trades, but over time many of the coastal routes declined.  The British & Irish Steam Packet Company Ltd was sold to the Irish Government in 1965, together with its subsidiary, the City of Cork Steam Packet Company, and several other companies were closed in the 1960s.

Coast Lines was itself acquired by the P&O Group in February 1971.  The takeover brought Coast Lines together with its long-time rival the General Steam Navigation Company, part of the P&O Group since 1920.  Both companies were restructured to form P&O Short Sea Shipping but which later became P&O Ferries.  By the mid-1970s most of the former Coast Lines identities and liveries had ceased to be used.

Although initially most of the Coast Lines records were deposited at the National Maritime Museum in the 1970s, it was later decided that due to the geographic diversity and essentially localised nature of the individual companies concerned, some archive material should be transferred to more relevant repositories.  Records of the parent company and its Liverpool-based concerns (including Zillah Shipping) have therefore been deposited at Merseyside Maritime Museum.  Some Irish material concerning the City of Cork Steam Packet Company has been moved to Cork City and County Archives.  Records of Belfast Steamship Company and other Belfast-related concerns have been transferred to the Ulster Folk & Transport Museum.  Records pertaining to the Ayr Steamship Company, Burns & Laird Lines, and William Sloan and Company are housed at Glasgow City Archives while Tyne Tees Steam Shipping Company records are held at the Tyne and Wear Archives Service.

When P&O Scottish Ferries was closed in 2004, material on its predecessor the North of Scotland, Orkney & Shetland Shipping Company that was held in the P&O Ferries office in Aberdeen was deposited at Aberdeen University, and at the same time other material on the ‘North Company’ and also on Aberdeen Steam Navigation Company, previously held at the National Maritime Museum, was also deposited there.