Operator of cargo liners between the UK/France and the Mediterranean

As early as 1815, James Moss, a Liverpool ship chandler, had an interest in trading with Mediterranean ports.  He was joined in partnership by Thomas Hampson and the company was named Moss & Hampson.  When the partnership dissolved in 1833, Moss partnered with his nephew, William Moss, and Richard Spencer under the new name of James Moss & Co.  The company used sailing ships on its routes until 1849, when William Denny's yard built the firm's first steamship, the Nile of 500 tons and 120 horsepower.

The Moss company was always primarily a cargo carrier and as such benefitted from the repeal of the Corn Laws in 1846 which promoted the import of grain to the UK and the American Civil War which forced the cotton-hungry spinners of Lancashire to look to Egypt for high quality long-staple cotton.  All this was good for the trade to and from the Mediterranean and by the mid-1860s, Moss had a dozen steamers in commission. 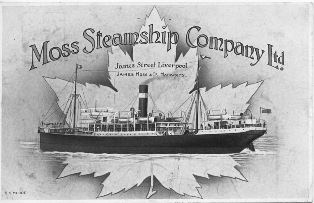 Following the death of James Moss’s nephew, the surviving partners decided to take advantage of the Limited Liability Act, and registered the Moss Steamship Co Ltd, with James Moss & Co continuing the management of the steamers.

In 1916 both Moss companies were taken over by the Royal Mail Steam Packet Company Ltd.  The First World War was disastrous for Moss Steamship Co Ltd which lost all but two of their ships, including two new vessels delivered during that period.    In 1919 Royal Mail used Moss Steamship Company to buy J & P Hutchison Ltd, an old established line in the Scotland/Ireland/ France trade.  However, it was not until the post-war economic depression and the financial demise of the Royal Mail Group that is became apparent to merge the two companies to form Moss Hutchinson Line Ltd in 1934.

A year later in 1935, the P&O subsidiary, General Steam Navigation Company acquired Moss Hutchison Line from the Royal Mail liquidators.  Under GSNCo ownership the Hutchison connection with France was maintained and Moss Hutchison funnel was again a familiar sight in ports along the North African coast, in Malta, Cyprus, Greece, Turkey, Syrian coast ports and Egypt.  Citrus fruit from Palestine and cotton from Egypt were the most significant cargoes homewards onboard their fleet of 17 ships.

Just as the first, the Second World War had an equally damaging effect on the Moss Hutchison fleet which was nearly halved.  Some of the fleet was replaced but there was a gradual decline in the field of conventional shipping.  It was not until 1971 and 1972 that two new ships were built for the Line, Melita and Makaria respectively.

In a major restructuring of P&O, Moss Hutchison (still wholly owned by GSNCo) became part of P&O General Cargo Division in 1972, but retained its traditional livery.  As patterns of trade in the Mediterranean changed radically, the change-over to containerisation made conventional cargo ships non-viable.  Moss Hutchison's fleet ceased to exist by 1979 and P&O continued the service using chartered tonnage until it was eventually transferred to Overseas Containers Ltd (OCL).

All material pertaining to Moss Hutchison Line originally placed at the National Maritime Museum, Greenwich has been transferred to Merseyside Maritime Museum.  The collection contains a limited series of Directors’ minute books, a single voyage ledger, a file on Moss Hutchison’s acquisition by General Steam Navigation Company, and scrapbooks about shipping operations in the Mediterranean.