The 1914 merger was no sooner achieved than the First World War broke out.  BI’s losses were heavy, but were partially offset during the war by the acquisiti 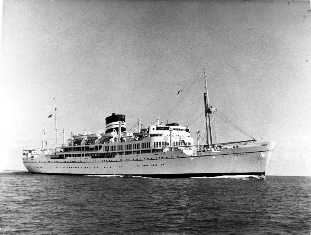 on in 1917 of the Hain Steamship Company (twenty-seven vessels) and James Nourse Ltd (six vessels), although both these concerns retained their operating independence and their own trades.  A massive replacement of tonnage after the War led to BI's becoming in 1922 the largest single merchant fleet in the world: 158 vessels of nearly one million tons gross afloat and in regular service.

The Earl of Inchcape died in 1932.  He was succeeded as chairman of the joint P&O/BI board by his son-in-law, The Hon Alexander Shaw (later Lord Craigmyle) (1883-1944), but Craigmyle’s term was short and he resigned because of ill-health in 1938.  His successor was Sir William Crawford Currie (1884-1961), a kinsman of the Mackinnons and a former senior partner of the Calcutta Office.  Like Lord Inchcape, he had the great responsibility of leading the P&O Group through a second World War – a war in which almost half of the BI fleet was destroyed.

The main post-war problem for BI, apart from fleet reconstruction, was the national shipowning aspirations of a newly-independent India, Pakistan and Burma.  The Calcutta/Burma service and the Indian coastal trades were relinquished, but the Home Lines maintained their services between the United Kingdom and Africa, Australia, India, Pakistan and Ceylon (later Sri Lanka).  The India/East Africa, Gulf, Straits, Australia and Far East services continued under the operational control of Mackinnon, Mackenzie & Co in Calcutta and Bombay until 1957 when P&O acquired the management company from the Inchcape family and moved most of its functions to a new BI Head Office in London.  At the same time the BI board was separated from that of the parent company P&O.

The ending of sea-borne trooping left surplus tonnage which was used to introduce educational cruising in 1962, giving employment to a few of BI’s vessels, while in ever closer co-operation with P&O, the UK/Australia and UK/Far East cargo and services were consolidated in the run-up to containerisation in 1969 and 1972 respectively.

On 1 October 1971, a major restructuring of the P&O Group into ‘operating divisions’ was completed.  As a result, BI’s remaining cargo liners and its passenger/cargo ships in the Indian Ocean and the Gulf were transferred to P&O General Cargo Division and BI's educational cruising was operated by the new Passenger Division (retaining her BI livery).  In 1982, the Bombay/Gulf service closed; a year later came the end of educational cruises when Uganda made her way to the Falklands, making her the last ship seen in BI livery.

The British India archive collection is deposited on permanent loan to the National Maritime Museum, Greenwich.  The collection is fairly comprehensive and includes a variety of material.  Minute books, accounts, correspondence, staff records, ships’ technical records and in-house staff journals are available along with other miscellaneous material.  A small amount of post-war material on Mackinnon Mackenzie & Company and on Mogul Line is included.  To view the full scope of the BI collection, please refer directly to the NMM catalogue.