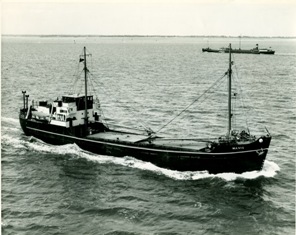 Although P&O kept a watching brief of GSN respecting the way it ran its business the involvement in day-to-day activities was slight.  GSN concentrated on the steady development of its existing trades as well as the acquisition of a number of significant subsidiaries beginning with the partial acquisition of Great Yarmouth Shipping Company in 1923 in partnership with T Small & Co (they were eventually bought out by GSN in 1931).  In 1935, Moss Hutchison Line acquired from the liquidators of the Royal Mail Group; the New Medway Steam Packet Company subject to a simple takeover offer a year later; and Grand Union (Shipping) was purchased in 1948.

In the 1950s GSN extended its shipping services to Canadian waters and also acquired control of Silver City, operators of cross-Channel air ferries carrying a handful of private cars each, as well as flying boat operators Aquila Airways, but these investments were neither successful nor long-lived.

By the mid 1960s GSN’s Thames excursion services had been closed as leisure activity patterns changed, and its conventional routes were being challenged by the roll-on/roll-off ferry and the container ship.  GSN became a leading player in two Anglo-European consortia, North Sea Ferries and Normandy Ferries, which became the backbone of what ultimately evolved into P&O Ferries after P&O re-organised its subsidiaries into five operating divisions in October 1971.  The GSN minority shareholders were also bought out in October 1971, and its former operations became part of P&O European and Air Transport Division, the short sea fleet being merged with the former Coast Lines operations as P&O Short Sea Shipping, soon to be rebranded P&O Ferries.

The bulk of the collection was placed on permanent loan to the National Maritime Museum, Greenwich by P&O.  Manuscripts ranging from management and operational papers, board minutes, annual reports, limited financial records, some passenger carriage information, staff records and those pertaining to subsidiary companies are housed in their library.  It is recommended to consult the NMM catalogue to determine the full range of material.

Records of Grand Union (Shipping) and Great Yarmouth Shipping Co are included in the GSN collection at the NMM; records of Moss Hutchison Line Ltd are held by Merseyside Maritime Museum.