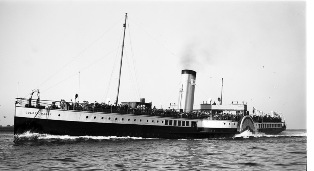 The 1860s and 1870s were relatively prosperous years for GSN save disruptions caused by an outbreak of plague among cattle on the Continent, severe winters which caused several northern European ports to become ice-bound, general disorganisation in North Europe produced by the Franco-Prussian war, and railways biting deeper into its passenger business.  An Order in Council of 1884 virtually brought to an end the important and lucrative trade in live animals from the Continent by the early 1890s, many of GSN’s steamers were laid up, and the company’s performance declined.

In the 1880s the Company made strenuous efforts to revive the pleasure steamer business on the Thames, dormant since the Princess Alice disaster, and succeeded in restoring public confidence in the excursion paddlers which every year carried many thousands of Londoners down river to such places as Southend, Margate, Clacton and Ramsgate.

In 1902 GSN revised its financial structure.  Its capital was reduced, and the company registered under the Companies Act.  By 1906, it was in a position to take over John Crisp and Son, whose activities included not only a shipping service between London and East Anglia, but also a river trade, which provided the company with a fleet of Norfolk wherries.  Some years later, in 1909, GSN acquired the freehold of Brewers, Chesters and Galley Quays, near Tower Bridge, developing further its wharfage interests, and consolidating its long association with the London river.

At the end of the First World War, GSN was becoming a prize worth having, and began to attract the attention of larger operators, keen to acquire it as a feeder service for their deep-water trades.  Eventually an offer of £5/10/- for each ordinary share was received from Gray, Dawes & Co on behalf of Lord Inchcape, former chairman of GSN and now Chairman of P&O.  This was accepted by a majority of shareholders in January 1920, and Inchcape sold his shares on to P&O itself in November the same year.