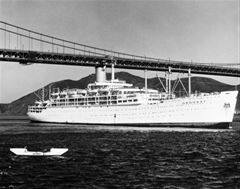 Description:
ORONSAY (1951) entering San Fransisco under the Golden Gate Bridge. The liner had just arrived from Sydney after taking approximately the same route across the Pacific which pacific rowers John Fairfax, 33 and Sylvia Cook, 32 followed in reverse when they began their attempt to row 8,000 miles to Sydney in 1971 in their 35' rowing boat Britannia II. Britannia is seen here in alongside ORONSAY.