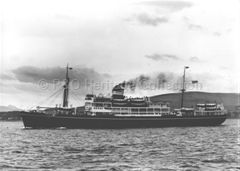 DARA on sea trials in the Clyde Estuary

Description:
DARA (1948) seen here on sea trials in the Clyde Estuary. On the 8th April 1961off the coast of Dubai DARA suffered an explosion in the shelter deck with tragic consequences. As fire raged through the ship 238 lives were lost and DARA was later rendered a total loss when she sank under tow. Inspite of a lengthy public enquiry, the cause of the explosion was never conclusively determined but many believed it was an unprecedented act of terrorism.