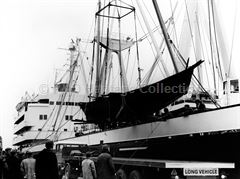 Description:
An Arab Umla being off-loaded from P&O's ARMANISTAN at Hull, for transport by British Road Services to the Exeter Maritime Museum. The two ton Umla, a rowed and beach-launched fishing vessel, comes from the Bhatinah Coast, in the Gulf of Oman. This particular vessel was built in 1969 for Mohammed Bin Nazir, and was donated to the museum by Messrs. Gray, Mackenzie and Company. P&O provided free transport for the Umla from the Gulf to Hull, via the General Cargo Division's regular fast service. between the Gulf and Europe.