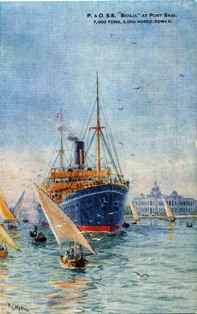 Records of ships’ movements belonging to either The Peninsular and Oriental Steam Navigation Company or any of its subsidiary company are far from complete.  For P&O specifically, consistent files do not exist through the whole of the company’s existence.  What is available in the P&O Archive falls into two categories:

The P&O Archive is on permanent loan to the National Maritime Museum, Greenwich and can be searched via their online catalogue.

There are no P&O timetables before 1847, but extensive research by the postal historian Reg Kirk produced three books which show more or less the pattern of P&O’s mail sailings during the two decades beginning in the mid-1830s as follows:

Kirk, Reginald, The Postal History of the P&O Service to the Peninsula (Royal Philatelic Society, London, 1987)

Although Kirk’s publications run up to the First World War, he does not cover non-mail sailings nor the parts of voyages when mails were not carried.  In addition there are more detailed Company records after 1847 which are accessible in the P&O Archive.

For the period 1847 to 1884 a retired P&O Marine Superintendent, Captain J C Ablewhite, researched and compiled two volumes of P&O sailings Out and Home from the Company’s Nautical Reports (see below).

From Captain Ablewhite’s tables one can establish not merely which ship was where and when, but how the complex web of P&O sailings interconnected, especially during the years before the opening of the Suez Canal.  For all ships, not merely those on scheduled mail services, Captain Ablewhite also produced a third volume giving each ship’s individual movements in brief.  These volumes are available in the P&O Archive housed at the National Maritime Museum in P&O/41 series.

For this period the P&O Archive contains a series of pasted-up copies of the proposed sailings for one year (for some earlier years separated into Outward and Homeward sailings) which have been amended by hand to show which ships actually took which sailings, and how they differed, if at all, from the intended details.  For some years there are supplementary pages giving details of cargo sailings, trooping and the emigrant Branch Line from 1910 onwards.  These are available in the P&O Archive housed at the National Maritime Museum.  Additional details regarding specific manuscript numbers can be found in the P&O Archives at National Maritime Museum research guide.