The majority of P&O Archives are on permanent loan to the National Maritime Museum in Greenwich. The collection takes up some 500 metres of shelving and includes records dated from 1837 to the 1990s. Prior to 1971, P&O subsidiary companies operated relatively autonomously and their archives reflect this. Their archives may be filed separately either in the National Maritime Museum's collection or elsewhere. After 1971 most independent subsidiaries were absorbed into the P&O Group records and are therefore included in the P&O Archive. The archives were deposited by the company in several instalments between 1971 and 2008 and are accessible in accordance with the Freedom of Information Act 2000. Certain exceptions are made particularly where staff records are concerned and where data protection legislation may apply.

The following is a brief guide to the contents of the archive relating to the P&O Steam Navigation Company. 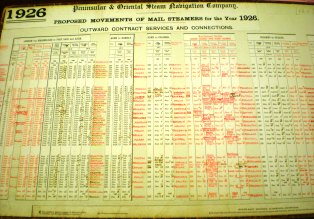 Log books of individual ships were not retained by the company, but abstracts of the log of each voyage by each ship were transcribed when received at Head Office into the ser 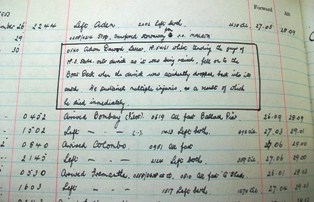 ies of ledgers entitled Nautical Reports dating from 1846 to 1955 (P&O/40/1-39) although there are substantial gaps in the 1920’s and 1930’s where volumes have been lost.  Books of ‘Regulations and Instructions for the Safe and Efficient Navigation of the Company’s Ships’ were issued at intervals to commanders, officers and engineers and several of these issued in various years between 1869 and 1959 are to be found (P&O/8/20-30), together with books of circulars, which updated or amplified existing instructions, again, for intermittent years, 1877 to 1922 (P&O/7/10-17).  A copy of the first book of ‘Instructions for Chief Engineers’ which appeared in 1867 also survives (P&O/9/1).  Pursers, stewards and clerks also received similar instruction manuals and several of these have survived, 1860-1941 (P&O/10/10-30).

Staff Records that have been preserved and placed on permanent loan include, most importantly, the officers’ registers 1849 to 1957 (P&O/75/1-11); the engineers’ registers 1847 to 1957 (P&O/76/1-12); stewards’ registers 1891 to 1940 (P&O/77/12-37); petty officers’ registers 1900 to 1949 (P&O/78/1-2).  Aside from giving dates of individuals’ entry into the company and listing their subsequent appointments, these registers will usually contain a reference to a man’s ability and conduct and his career within the company may be easily plotted therefrom.  The comparable records of pursers have not survived, but there are volumes containing confidential reports on pursers and stewards in charge 1879 to 1926 (P&O/86/1-2).

There are several items of a very general nature associated with mergers and take-overs, but little in relation to the tide of amalgamation which took place: eg in relation to the Blue Anchor Line, 1910, to the British India Company, 1914, to the New Zealand Shipping Company, 1916 etc.  Lord Inchcape was however in the habit of producing memoranda for the Board on deals which he organized while Chairman and copies of most of these between 1916 and 1923 are included at the appropriate point in the Board Minutes (P&O/1/119).

As with all very large collections, there is a generous amount of miscellaneous matter, eg a log of events in the history of the company, 1836-1961, compiled by a member of Staff (P&O/91/1) a diary of a voyage to Singapore in two of the company’s ships 1854 (P&O/92/1); files of congratulatory letters and telegrams on the occasion of the company’s centenary, 1937 (P&O/91/16).