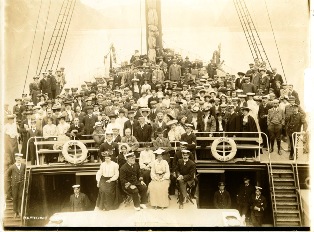 Until 1960, all ships carrying passengers in or out of any British port were required by law to deposit an official passenger list with the relevant port authorities.  These lists were compiled for the Statistical Department of the Board of Trade (BT), a UK Government body responsible for a variety of tasks.  These lists record migrants, tourists, business travellers, men, women and children.  With no other immigration or emigration records required to be completed during this period, these represent the only way of identifying people leaving, entering or passing through British ports en route for overseas ports in Africa, Asia, North America, Australia and elsewhere.

In general, British official passenger lists do not exist for the following:

Passenger lists may also exist for overseas ports served by a ship in which you are interested, but it is not possible to go into detail here.  Please contact the port authorities or national archives in question.