A Third Register of Merchant Seamen's Service was begun in 1854 and continued until 1856.  This register is located in BT 116 in alphabetical order by name.

Following the closure of the Third Seamen's Register in 1857, no central register of seamen was kept for 56 years and therefore no records such as those preceding exist.  The Board of Trade felt that Crew Agreements and Lists provided an adequate means of recording information about the seamen without the need to create a separate register.  Researchers will therefore have to rely on the agreements and other types of sundry records, where they exist for this period, in order to carry out their research.  Please refer to Research Guide: Crew Agreements, Lists and Official Logs for more information.

In 1910 the Government's Advisory Committee on Merchant Shipping recommended the creation of a new Central Register of Seamen and so the Fourth Register was started in October 1913 and continued until 1941.

That said, the cards for the period 1913-1920 were destroyed in 1969 for unknown reasons.  For these specific years, you should consult the Crew Agreements and Lists during that period.  To do this, you will need the name and the Official Number (ON) of the ship(s) on which the seaman served.  Once you have the ship name(s) you can obtain the ON(s) by either consulting copies of the Mercantile Navy List or Lloyd’s Register of Shipping.  The National Archives has a partial set of both, while the National Maritime Museum holds a complete set of Lloyd’s Register.

Although the majority of the cards from 1913 to 1920 were destroyed, a selection of them, dating from 1918 to 1921, can be traced using CR10 cards.  Originals of these cards are located at Southampton City Archive, however The National Archives holds copies of the registry cards on microfiche in BT 350.  This series is arranged alphabetically by surname.  On the front of each card, information provided includes: Discharge ‘A’ number, Certificate of company number, name of seaman, year and place of birth, rank or rating, name (sometimes) and Official Number of ship and date of engagement of service. 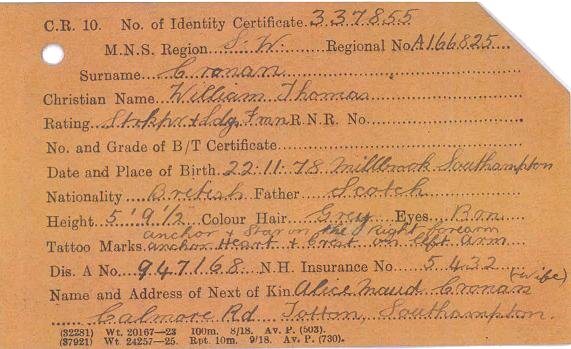 The reverse of the CR10 card has a photograph of the seamen with numbers and names listed.  Those are the names and/or Official Numbers of the ships on which the seaman served.  The number on the actual photograph is the Seaman’s Ticket number as seen on the front of the card. 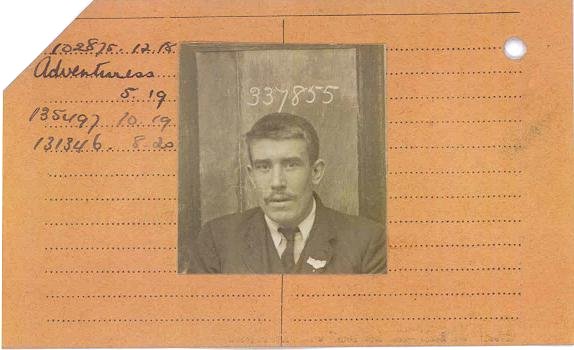 To locate seamen during this period, it is best to consult the CR1 cards held at The National Archives in series BT 349 which is on microfiche and catalogued alphabetically by surname.  Each card typically gives the following information: Surname, Christian name, birth year and place of birth, Discharge ‘A’ number, rating, RV2 number, certificate grade and number (if owned), PR number, health insurance number, unemployment insurance number, height, colour of eyes and hair, complexion and distinguishing marks. 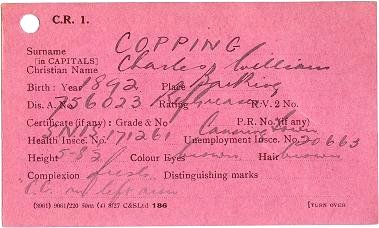 Once you have located the Discharge number, you can then search for the seaman’s CR2 card in BT 348 which is organised numerically by that number (omitting any prefix letter before it).  These CR2 cards should show a list of the ships on which the seaman served, customarily by its Official Number.  However, the clerks do not seem to have entered every change of ship and you may find that the record is incomplete and that some additional ship details may be recorded on the CR1 and CR10 cards. 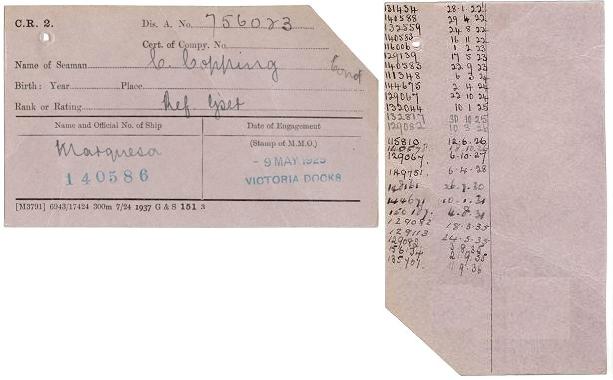 Front and Back of CR2 Cards in BT348. © National Archives

Organised by the seaman's Discharge 'A' number this index was compiled using extracted cards from the other three indexes.  The reasons for doing this are unknown.  They are located in series BT 364 as the Register of Seamen, Combined Index (CR1, CR2 and CR10 cards) 1918-1941.  For details of what you will find on each type of card please see the descriptions above.  The majority of these cards refer to seamen who went on to serve after 1941 and thus their Discharge 'A' number may be found from the 'docket book' in the Central Register of Seamen BT 382.