The Crew List Index Project (CLIP) started as a project to improve access to the records of British merchant seamen for the last part of the nineteenth century - mainly by indexing records at local record offices throughout the UK.  CLIP has gathered the largest database of entries directly from crew lists. Its website gives information about the nature of crew lists, how to find the original documents and the seafarers on them, indexes of seafarers including the CLIP data, CLIP finding aids and details of projects on the records of shipping and seafarers.  The CLIP database can be consulted on www.crewlist.org.uk or on www.findmypast.co.uk

Official Logs are not, as many people assume, a daily diary of a ship's movements (these would be more usually be known as Bridge Logs or Deck Logs, which were compiled for use by the shipping company and not for legal reasons).  Official Logs are more of a 'parish register' for the ship, noting vital information about the crew and passengers, but updated only when an event was considered worth recording.  The Mercantile Marine Act of 1850 required Masters of all British-registered ships to keep an Official Log for every voyage and laid out rules for doing so; however, most recorded events were limited to new arrivals on board (such as births or the signing on of a new crew member), departures (death, disappearance, desertion, or signing off crew members at intermediary ports before the end of the voyage), marriages, illness, and any disciplinary action taken against crew members. 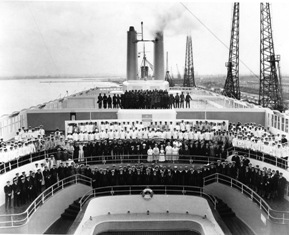 The Log typically records the ship's position at the time of any birth or death, but may make no other reference to the ship's movements.  Sailing and arrival dates are sometimes noted but were not a requirement of the log.  The crew agreement, which provides as a minimum the date and place of the beginning and end of the voyage, is often more informative in this respect.

Home Trade ships were required to deposit their Log half-yearly, and Foreign Trade ships after each return voyage, with the Registry of Shipping and Seamen.  The earliest surviving logs date from around 1852, but relatively few exist for the early years.

If you are able to locate a Crew Agreement for a particular voyage, it is likely that you will find the Official Log attached if it still exists.

Suggested repositories for Official Logs include The National Archives series BT 165 (Registrar General of Shipping and Seamen and predecessor: Ships' Official Logs) which contains a partial collection of log books covering the period 1857-1972.  This series contains select logs from 1857 to 1889, and a further selection from 1922 to 1972.  For the period 1902-1912 when a birth, marriage or death occurred on board the Log was normally preserved; it is therefore possible to find death records for soldiers and prisoners-of-war returning on ships from the Boer War.  For the First World War (1914-1919) all surviving logs containing casualties are preserved in the same series BT 165.