You are here: Features > The Container Revolution: 50 Years Ago

The Container Revolution: 50 Years Ago

Half a century after then the world's largest container ship set sail, we look back and forward to the next revolution in sea trade.

When Encounter Bay, the world's largest container ship, set sail 50 years ago this week, her owners, OCL, knew they were pioneers in uncharted waters.  But the course they took, would revolutionise the handling of cargo for the next half century, and beyond.

In the mid-1960s, the future of British liner shipping was under the threat of growing competition from the US and Malcom McLean.  As the inventor of the container, and owner of Sealand, McLean had a competitive advantage:

“…the USA, led by McLean, had the ball at its feet in front of an open goal.”

"The formation of OCL will one day, when our successors look back on it, mark the moment when a new design for cargo liner operations...began to be sketched out".

As radical and revolutionary as the move from sail to steam, containerisation called for an entirely new transport system and major capital investment in logistics and infrastructure (including ships, ports, roads, rail and distribution hubs).

Collaboration was critical to the success of containerisation.  With some of biggest names in liner shipping in tow, OCL was well placed to lead Britain into the box age.

In spite of methods and machinery to unitise loads (from cargo nets to fork lift trucks and palletisation), cargo handling in the 1960s was still highly labour intensive and time consuming.  Containerisation promised to improve both, but not without some controversy…

As early as 1966, the Port of London Authority predicted (based on 1 million tons of cargo per annum) that 21 container berths could do the equivalent work of 300 riverside wharves and 160 enclosed docks.

"Quiet lads, we're coming up to the dock gates!"

So it was that, at 9.05 on 6th March 1969, the largest container ship in the world, Encounter Bay, departed from Rotterdam, not Tilbury, on her maiden voyage to Australia.  Her full complement of 1,300 containers having first been transhipped, from Harwich and Ipswich, in a covert plan called “Operation Bolthole” (conducted with the military precision of its architect, General Prior-Palmer). 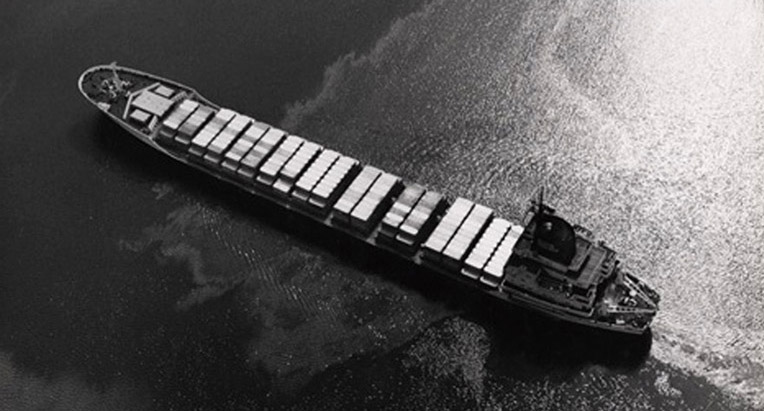 Filled with goods ranging from “toothpaste to caterpillar tractors”, Encounter Bay arrived at OCL’s new facilities at Fremantle on 28th March before continuing to Sydney and Melbourne.  Although the new ‘through’ service was welcomed with open arms down under, OCL encountered its fair share of labour difficulties in Australia too.

“It is with great pleasure that we welcome this new era of industrial unrest…!”

"The Computers are Coming"

The drive towards greater automation and efficiency in container handling extended to OCL’s pioneering use of computers and an integrated booking system, which was well ahead of its time.  Booking data input, into the IBM 360/30, was used to generate the ships manifest and conveyed by magnetic tape (called an international exchange file) to the office in Australia.

Tracking the location and status and contents of individual containers relied on a system of punch cards, control boards and small magnetic tags, giving rise to the cry “keep tabs on your tags boys”!

By the end of 1969, 1 million tons of cargo, in 36,681 containers, had been handled at opposite ends of the world.  OCL had taken delivery of 5 ‘Encounter’ class container ships and, together with another consortium, ACT, operated a weekly service to Australia.

“We created the ships and the terminals, and the cranes and the fork-lifts and the straddle carriers, rail contracts, the road contracts, the containerbases, the documents, the new commercial procedures and everything that goes to make what is now commonly accepted as a through-transport operation.  It was the first and the first is always the most difficult”.

Attention turned to Southampton in 1970 when OCL acquired a 65% share of Solent Container Services (SCS) - the forerunner of SCT and DP World Southampton today.  Photo: SCS, 1972

New ships, new routes and new trades joined the OCL enterprise and in 1976 the company handled its millionth container.  In 20 years (and shortly before the company was acquired by P&O in 1986) OCL had returned a healthy £338 million profit, on an initial investment of £66 million.

Containerisation was here to stay and the pioneering endeavours of the few were paying dividends for the many.

Encounter Bay has earned a coveted place in history as the first in a long line of record-breaking container ships.  With an initial capacity of 1,300 containers, she would be dwarfed today by her modern equivalents with 15 times the teu capacity.  Encounter Bay’s bell and a scale model of the vessel are just two among many thousands of treasured items in the P&O Heritage Collection, proudly preserved by DP World.

Bytes and Boxes: The next big thing? 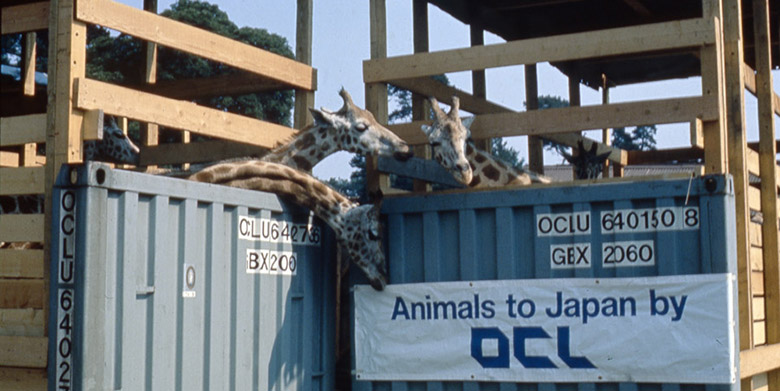 50 years ago a brave few lead the movement from bundles to boxes and future proofed their place in global trade.  It was a revolutionary, risky but undeniably smart move…

Today we are getting smarter still.

“Data has the power to disrupt and drive the supply chain as we know it.  And, as our capacity to capture, analyse and interpret it increases, so too will our ability to address one of the biggest problems currently plaguing the industry: visibility, or more precisely, the lack thereof.” 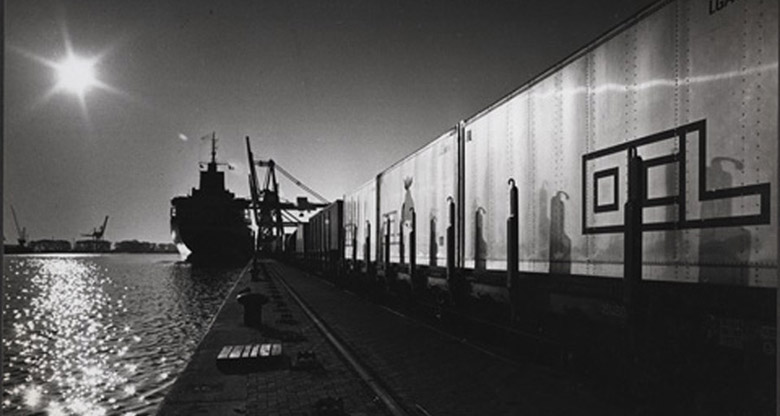 Are we on the brink of the byte revolution..?

“The way I see it, these are exciting times and at DP World we are not going to sit back and let them pass us by. As I write, our teams are busy exploring the technologies and partnerships of the future. The best part in all of this? With the world still waking up to the power of the data at our fingertips, we’re only just getting started.” 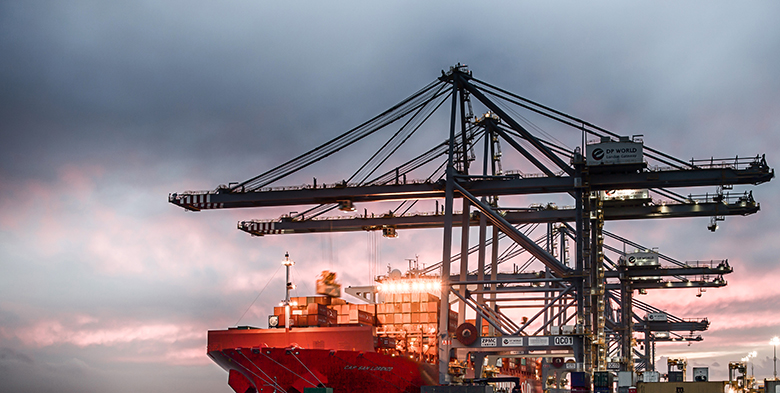 "British Box Business - A History of OCL" published by SCARA 2009, ISBN: 13978-0-9559227-0-1.  An excellent history of OCL written with the help and recollections of the company's founders, directors and senior staff.