Continuing our series of online articles commemorating our 180th Anniversary, Senior Curator, Susie Cox takes a comical look at some of the company’s newsworthy moments through our collection of original cartoons. 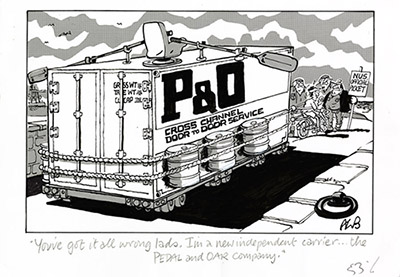 "Drawings don't have a point. Cartoons, you want to have an opinion; you want them to express a viewpoint."  American cartoonist, Steve Breen

P&O has had many inglorious moments, in its long history, which might have been forgotten were it not for the sharp pencils of some of the best newspaper cartoonists!

In December 1998 the Tory party was in disarray over the House of Lords Bill.  A shadow cabinet reshuffle followed and a number of conservative peers resigned the party whip.  You might wonder what all this had to do with P&O.  Very little until the lead cartoonist of The Times, Peter Brookes, depicted the troubled Tories aboard the equally troubled CANBERRA which suffered a power failure on 7th December, leaving the liner drifting in the Solent. 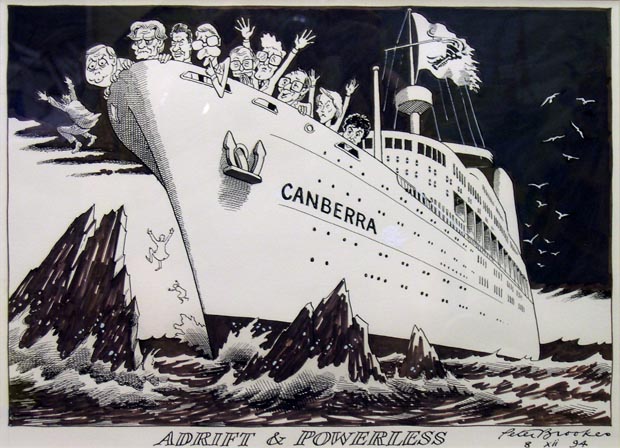 To those in the know, there was an extra point made by Brookes’ clever cartoon. P&O had donated £100,000 to the Conservatives making it the second highest corporate donor to the party in 1998.

It wasn’t the first time CANBERRA had been caught powerless and adrift.  In 1963 an engine room fire disabled her main engines in the Mediterranean whilst en route to Australia.  Two late and great cartoonists, at the height of their craft - ‘Jon’ (John Jones 1913-1992) and Giles (Carl Ronald Giles 1916-1995) - tackled the subject in their own distinctive styles. 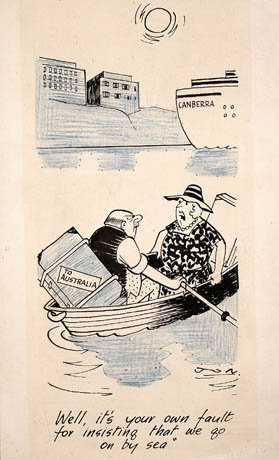 When a similar fate befell ORIANA, prompting a two-week delay, Giles was ready with relish and wit, dedicating the cartoon to "P&O with deepest sympathy"!

Aside from delays, there were more serious concerns in the form of industrial disputes which hit the headlines and spawned the greatest number of cartoons in our collection.  In the way that only a cartoon can do, the complex issues on either side of the argument were cleverly condensed into a series of single images capturing the mood of the moment.

The arrival of the now ubiquitous container in British ports was highly controversial.  In London, dockers fearing the loss of jobs and and erosion of pay and conditions, staged a dispute at Tilbury dock that lasted 13 months from 1969-70.  P&O was part of the OCL (Overseas Containers Ltd) a consortium of British shipowners which joined forces to meet the demands of the container revolution.

Jak (Raymond Allen Jackson 1927-1997) followed the dispute for the Evening Standard producing no fewer than 8 cartoons on the subject in his trademark style and medium (pen and blue wash over pencil).

OCL acquired the originals of all 8 cartoons (Jak was a personal friend of OCL's publicity department) and 4 remain in the P&O Heritage Collection today.

20 years later Jak turned his attention to another dispute involving P&O – the Seafarers Strike of 1988-89.

More than any other, this dispute yielded the greatest number of cartoons in our collection with works by the great cartoonists of the past; Jak, Calman (1931-1994) & Gale (George Gale 1929 – 2003) and the present; Tom Johnston, Michael Heath and Matt.  Each one offering a personal and humourous comment on a difficult and turbulent time. 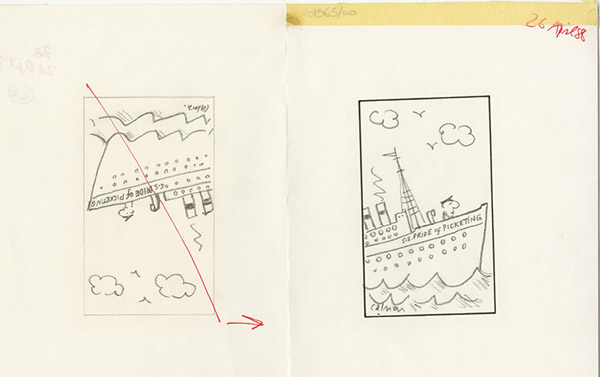 The Seamans strike began on 6th February 1988 and brought P&O Ferries to a standstill for almost two months. 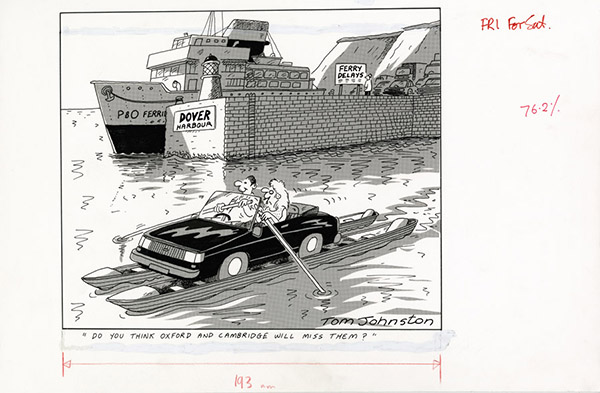 It had been a painful period for all concerned but, rather than shy from controversy, P&O chose to buy the original cartoons recognising that these disputes and had to be part of the company’s history, warts and all.

Today these cartoons are cherished in our collection.  They serve to remind us not only of our past but also of the skill, artistry and brilliance of many of our best loved cartoonists.

"I don't like the word 'art' applied to cartoons, I find it derogatory. Cartoonists use more brain power in a morning than most artists use in a year."

Our thanks to the cartoonists and newspapers for the opportunity to share these works with a wider audience online.

For more information on cartoons and cartoonists visit www.cartoonmuseum.org and the British Cartoon Archive www.cartoons.ac.uk