For this month’s object, our conservator, Anna-Klara Hahn has decided to showcase one of our most precious manuscripts from our Collection, relating to the formal establishment of P&O by Royal Charter

The Royal Charter was the culmination of months of negotiation to merge the interests of Peninsular Steam Navigation Company and the Transatlantic Steam Ship Company, and a new concern Peninsular & Oriental Steam Navigation was born. Oriental was added to the name to reflect the Company’s operation of mail service to Alexandria and the commitment to establish a steam connection to India by 1842. The paddle steamer ORIENTAL, launched earlier in 1840 as the UNITED STATES by the Transatlantic Steam Ship Co. was in fact quickly renamed following this merger, to now suit her new route to the Orient. 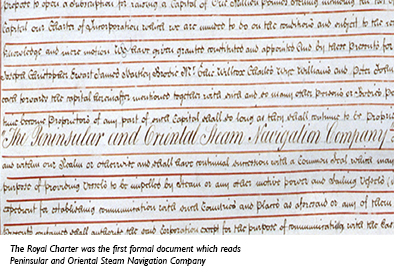 As the Company grew and expanded, the Royal Charter had to be amended and it has been altered thirteen times. These changes related to some specific aspect of its operations, its routes and commercial activities, or its powers in respect of capital.  But perhaps the most notable change was recorded in the 9th Supplemental Charter from 1903. The Government’s instigation, as part of a policy of protecting British shipping from overseas influence, the new Royal Charter contained:

“ … an important proviso, on part of the Government, that the Company shall remain a British concern in name and in reality”.

The resulting wording drew a distinction between “UK-held stock “and “overseas stock”, and limited “the aggregate amount of overseas stock” to a maximum of “one quarter of the total amount of issued stock of the Company”. This clause was only removed in 1992 when the UK joined the EC, later EU.

This meant a new supplementary Charter was produced each time. With time the beautiful and elaborate handwritten manuscripts were gradually reduced to printed documents with stamped seals as seen below.

Only one other shipping company was awarded a Royal Charter in 1840, the Pacific Steam Navigation Company, and today only a handful of companies have the distinction of being incorporated by Royal Charter.

About the Royal Charter

A royal charter is an official document issued by a monarch. The Great Seal attached to it, is applied by the Crown Office and is proof of Monarch’s approval, it has the same effect as his or her signature. The seal attached to the P&O Royal Charter is the Great Seal of Queen Victoria.

Our Great Seal, a pendent seal, is made of wax and measures approx. 15cm in diameter and 2.5cm in depth. Sealing wax, usually a mixture of beeswax and some resin, which naturally has a yellow or pale brown tone was melted in to an engraved metal mould or matrix, creating these three-dimensional and beautifully detailed impressions.

With age the wax tends to darken to a dark brown colour.It is attached by a red, pleated cord to the bottom of the Charter. Seals like this are very vulnerable to breakage. The seal on our Royal Charter had also been damaged previously and was repaired with new wax.

Our Royal Charter has an engraved black and white decorative border, depicting Queen Victoria in the top left corner. It is beautifully handwritten in black ink along the red horizontal ruled lines on vellum. It has blue embossed paper payment stamp adhered to the top left. It is made up of two folios; one still remains rolled up.

Vellum (derived from the Latin word vitulinum meaning "made from calf", leading to Old French vélin, "calfskin") [is best quality of prepared animal skin or “membrane” used as a material to write on. The skin is washed and then soaked in water and lime for several days to soften and remove the hair. Once it is cleaned, it is stretched on a frame (a “herse”), scraped with a crescent-shape knife (a “lunarium” or “lunellum”) and dried. The skin is also often treated and bleached further to create a white surface finish

Although vellum is a very strong and durable material it is hygroscopic in nature, meaning it absorbs water from or releases water into the atmosphere as the relative humidity changes. This can cause it to expand or contract rapidly and radically which alters it shape. This can be irreversible. It is therefore essential to minimise any fluctuations in relative humidity and vellum should be stored and displayed in a stable environment.

To find out more about the Royal Charter, see our timeline: http://www.poheritage.com/our-history/timeline