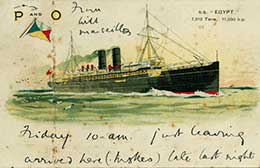 The loss of Egypt on 20th May 1922 was keenly felt by Inchcape and the P&O Company. Although they, and Egypt's Captain, would later be exonerated from all blame, the loss of life, 71 crew and 15 passengers, in peace time was a cruel irony.

The collision with the French cargo steamer Seine occurred 25 miles off the French island of Ushant in dense fog. Radar had yet to be invented.

The impact from the Seine’s bow, strengthened for the icy waters of the Baltic, left Egypt with an ‘enormous dent’ in her midships, on the port side. The vessel heeled over immediately and within 20 minutes she had turned ‘full turtle’ and sunk. Only six lifeboats made it away safely. The rest of the survivors were picked up by the Seine itself, apparently undamaged by the incident.

Egypt went down with her precious cargo of 5 tons of gold, 10 of silver and many thousands of sovereigns, worth an estimated £1million – the equivalent today of £41 million. It was the start of one of the most fabled, and venerated, salvage operations ever conducted.

Lying at an immense depth of 125 metres (70 fathoms), it was eight years before the wreck site was identified and a further five before her expensive cargo was raised to the surface. The salvage operation, by an Italian company, was complex and difficult, requiring the use of explosives, remotely controlled grabs, a diver encased in an armoured diving suit weighing half a ton and a telephone!