With a handful of exceptions, P&O ships were traditionally painted black with a stone or buff coloured superstructure and black funnels. The 1930s changed all that. 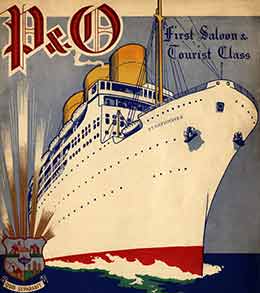 Two new ‘Strath’ liners, designed for the Australia run, broke with tradition and sported a bright white livery with buff funnels. The new colour scheme was made possible by the switch from coal to oil powered engines. Black had usefully concealed the dirt from coaling. White was clean, modern and much cooler in the tropics. Two ‘White Sisters’ grew to five and before long the new livery was adopted throughout the passenger fleet.

Besides their colour, the ‘White Sisters’ were innovative in other ways too. Strathnaver and Strathaird were the first P&O ships to have portholes and running water in every cabin and to accommodate more ‘tourist’ (or second) class passengers than first. The deck space was greatly increased for sports, designed to appeal to the more outdoor, antipodean passenger whose numbers were growing. Australia was rapidly replacing India as the Company’s principal route.

Internally the 'Straths' clung to a well-worn, historicist style at the hands of Vicountess Inchcape and Lady Shaw. Only the later ships, Strathmore, Stratheden and Strathallan, launched between 1935 and 1938, made even the slightest nod to modernism.

All five of the 'White Sisters' took cruising beyond the Mediterranean and Baltic waters to the Pacific with Strathaird conducting the first cruise from Sydney to Norfolk Island on 23rd December. The fare cost 10 or 16 Australian pounds and all 900 berths sold out in just three days.

Within a year the number of cruises and their destinations had expanded to include New Zealand and Fiji. By the end of the decade the 'Straths' carried nearly 7,000 Australian cruisers in one year. Only the war could bring the craze for cruising ‘down under’ to an abrupt and temporary halt.