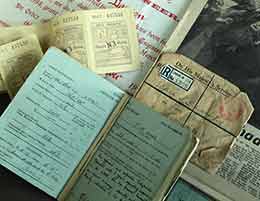 London’s docks and offices were just as vulnerable to air attack as any of P&O's ships. And as Glasgow and Liverpool were deemed safer havens than London and Tilbury, arrangements were made for the temporary displacement of ships and staff.

Photographers busied themselves throughout 1939 making duplicates of important Company records, contracts and files. Outside London, P&O acquired a Georgian house at Red Heath, Croxley Green, Hertfordshire, known as 'somewhere in the country', to avoid detection. By August 1939 several head office departments had relocated to their new rural offices, where staff were billeted in military style ‘hutments’ and catered for in a barn.

A skeleton staff remained at 122 Leadenhall Street including management, the Chairman and his deputy. Both Currie and Archibald Lang made few concessions to their safety, only moving to the ‘small board room’, at the height of the blitz, to be closer to the air raid shelters. Despite a few near misses Head Office and its occupants emerged unscathed. The Chairman addressed the AGM in the boardroom, in 1945: 'we are delighted to welcome you in this first year of peace to this same old room undamaged and the same pictures in their usual place'.

The Orient Line was not so lucky. In 1941 a bomb completely destroyed their Fenchurch Avenue office and with it the company’s archive.