‘He brought the company out of what might be described as a 'slough of despond' and by his energy and ability he left it a sound and prosperous concern.’ First Earl of Inchcape 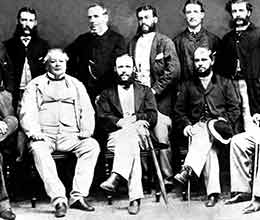 Born in 1834 in Aberdeen, Sir Thomas Sutherland was to devote seventy years of service to the Company becoming, arguably, its most significant Chairman and one of the leading figures in British shipping.

The journey began when Sutherland, encouraged by James Allan (who himself clocked up 33 years with the Company), travelled south to London to work as a P&O clerk at the age of 18. Before long he was sent out, first to the Company’s offices in Bombay and then transferred to Hong Kong. The switch proved to be the making of him.

The Bombay agency was already well established with room only for ‘small fish’. In Hong Kong there was much to be done and Sutherland was quickly able to build up a reputation for himself, both within P&O and the local community. He set up a company to build the first dock in Hong Kong (establishing the foundations for the Hong Kong and Whampoa Dock Company) and in 1864 he instigated the Hong Kong Shanghai Banking Corporation, better known today as HSBC. 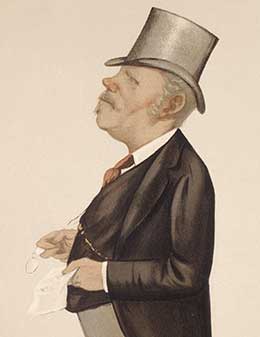 Sutherland’s achievements in Hong Kong, and further afield in Japan, did not go unnoticed by the Managing Directors, who recalled him to London at the height of P&O’s troubles in 1866. Sutherland was quickly dispatched to tour the Company’s agencies in the Eastern stations and make changes, as he saw fit. He may have had a hand in the ‘Statement’ produced in the same year and certainly the tour gave him a clear perspective on the Company’s entire operation.

It was Sutherland who most fully appreciated the commercial and political implications of the Canal and in 1872 he was appointed Managing Director, joining James Allan again only this time as an equal. Within a decade, he became the Company’s youngest ever Chairman at the age of 47.

Heralded as ‘one of the Great Victorians’ and P&O’s saviour, Sutherland continued at the helm of P&O for 33 years until he passed the reigns to another Scot, James Lyle Mackay (later the Ist Earl of Inchcape), in 1915, following a historic merger with the British India Steam Navigation Company.