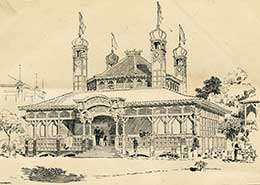 The high minded aims of the Royal Naval Exhibition in 1891 sought to remind the British public that, 'it is the Navy, under the Good Providence of God itself, that our wealth, prosperity and peace depend'. For P&O, the exhibition provided an ideal opportunity to position itself in the heart of a national celebration of Britain’s maritime history and empire. The Company employed Thomas E. Collcutt, the architect then designing P&O’s new office in London at 128 Leadenhall Street (which opened in 1893), to create a pavilion celebrating the Company’s past and present achievements. Described as ‘one of the prettiest and most interesting’ exhibitions, Collcutt’s pavilion was oriental in design and filled with ship models, paintings, photographs together with two cabins and a portion of the Smoking Room of Australia then being built at Caird & Co. In June 1891 Queen Victoria visited the P&O pavilion and sat for an official photograph in front of it.

The Royal Naval Exhibition ran for six months and was an enormous success, later to be repeated. The P&O pavilion was sold, dismantled and re-erected in Devonshire Park, Eastbourne where it remained until 1963.