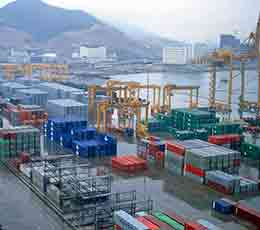 In 1980 P&O Australia acquired a majority share in Brisbane Container Port and a few years later the Company expanded beyond its own waterfront to Port Klang in Malaysia as a joint venture partner. The success of the Port Klang container facility set a precedent and a template which was then repeated across a number of terminals and countries.

In the UK, P&O had acquired interests in the port of Felixstowe (later sold in 1991) and Larne Harbour through past subsidiaries. The purchase of the container shipping interests of Cunard Ellerman, from Trafalgar House, in 1991, opened more port doors and in 1992 P&O acquired a 51% stake in both Tilbury Container Services and Southampton Container Terminals, in an agreement with Associated British Ports.

By 1995, P&O had an equity or management interest in over 30 ports worldwide including Shekou in China. Laem Chabang terminal in Thailand commenced operations in 1998 and a year later P&O expanded its port interests into Indonesia and America.

Ports were proving their worth and, with a healthy return on investment, they had become the core focus of P&O’s business and future by the end of the decade.