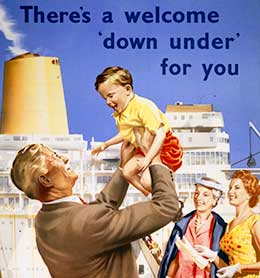 P&O was cautious in rebuilding its postwar passenger fleet. Mail contracts, which had dominated the shape and schedule of the passenger liners for over a century, were no more and, faced with the threat of competition from the air, the Company had to rethink. P&O needed to attract a new kind of passenger and Australia was about to provide the answer.

In 1946 Arthur Calwell, Australian Immigration Minister, assured the Company that 'Australia needs and can absorb 70,000 people per annum'. Calwell needed ships and P&O had four old dames in the fleet - Mooltan, Maloja, Ranchi and Chitral - which having survived the war were reconditioned ‘on austerity lines’ and chartered by Government for four years between 1948 and 1952. Would be ‘settlers’ were given an ‘assisted passage ticket’ and the '£10 pound pom' had arrived.

The full fare was closer to £75 (the equivalent of several months wages) so the assisted passage was a very good deal - provided you wanted to stay, of course. And many did. In the first year of the scheme P&O carried 3,597 and for the next year they set their sights on 28,000 – a third of Calwell’s quota. The £10 pound poms were as much a boon to P&O’s economy as they were to Australia’s.