'The RAWALPINDI made a most gallant fight against overwhelming odds and went down with her colours flying.' Official Admiralty Statement, 1939

In the main, P&O’s passenger liners began their war career, like Rawalpindi, as armed merchant cruisers (AMCs) escorting military formations, equipped only with 6” and 3” guns. And as Rawalpindi had so painfully proved, their armoury was no match for the might of the German battle cruisers. With the advent of naval frigates and corvettes, the AMCs were gradually phased out and one by one the Company’s liners joined the 'Straths' as troopships.

With their large passenger capacity and speed, the 'Straths' were well suited to troops carrying 3,000 in comparative luxury: 'It is doubtful if ever before, in peace or war, combat troops had been transported in luxury equal to that we enjoyed aboard the Strathnaver.' On one occasion, on March 24th 1941, all five 'Straths' departed their Clyde anchorage together, as part of a 21-troopship WS (or ‘Winston Special’) convoy bound for Africa. 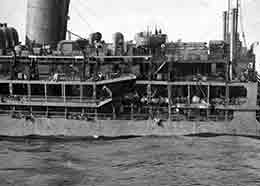 P&O’s cargo ships had their own uses and all 10 were requisitioned by the Liner Division as cargo carriers for the Ministry of Supply and Food and Mechanical Transport ships. The Company’s four coastal ships played various wartime roles and a collection of some 20 launches, tenders and tugs, owned and operated by the Company, were deployed in their various ports from Aden to Hong Kong.

The entire P&O fleet was at war, clocking up over 7 million miles on His Majesty’s service.

Whether trooping, defending or carrying, P&O ships ran the gauntlet of German U-boats, bombs and guns with often perilous consequences. Only half of the fleet made it through the war. Of the 19 that were sunk, the majority were torpedoed or bombed. Seven were lost in the winter of 1942 alone.

The 18 ships that survived remained in Government’s hands until troop movements had ceased and the extensive work of repair and reconditioning had been completed. Hampered by delays in the supply of materials and labour, it took the best part of four years before some ships re-entered service.