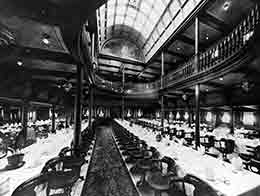 Between 1903 and 1911 ten ships were built at Caird & Co. in Greenock and Harland and Wolff in Belfast. Together they ushered in a new class in size, speed and comfort. By placing the majority of the accommodation above the main deck, passenger comfort was greatly improved. The Company’s growing use of professional designers and architects, such as Thomas E Collcutt, assured that greater thought was given to the detailed design of public rooms and facilities on board. New and commodious, the M class were well suited to seasonal cruising too.

The first of the class to exceed 10,000 tons was Marmora, in 1903, swiftly followed by Macedonia, the first P&O ship to be fitted with quadruple expansion engines. Above deck the new ships were able, for the first time, to make use of Marconi’s invention of wireless telegraphy, albeit sometimes for less than essential purposes. In 1910 the passengers of Mantua, travelling East from Fremantle to Adelaide, played chess against those of the Morea travelling west. The game was conducted by wireless telegraphy and lasted six hours with Mantua taking the honours in 21 moves.