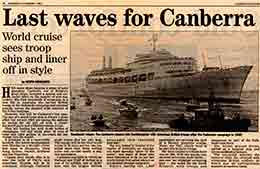 Oriana was launched by Her Majesty the Queen on 6th April 1995 in Southampton. As so often before, the arrival of the new heralded the departure of the old. After 36 years of service Canberra bowed out on 30th September 1997. The liner had started life as ‘the ship to shape the future’ and ended it as the much loved ‘Great White Whale’. She had sailed more than 3 million miles, carried nearly a million passengers (of every possible description) and played a significant part in the Falklands conflict.

As the last of the P&O liners, Canberra’s demise was much discussed, debated and even commented upon in Parliament. In the course of her career liners had come and gone, leaving leisure to lead the way in the age of the cruise ship.