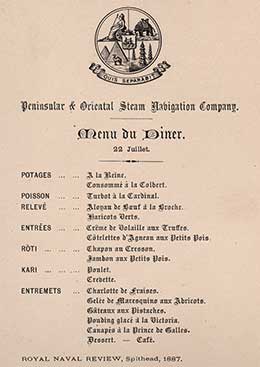 In 1887 the first of the Jubilee steamers was launched as Victoria. She was the largest ship the Company had ever built and took part in the Royal Naval Review at Spithead on 23rd July, together with a number of P&O vessels. The Company hosted 120 distinguished guests on board including several eminent MPs, two would-be Prime Ministers and the Governor of the Bank of England. No passenger list would, or could, quite match it again.

As a lasting legacy of the Jubilee, the Company commissioned four polyptych paintings, by R. H. Neville-Cumming, commemorating significant milestones in first fifty years and all four of the celebrated Jubilee ships. The paintings still hang proudly in DP World’s London office today, where they are an integral part of the P&O Heritage Collection.