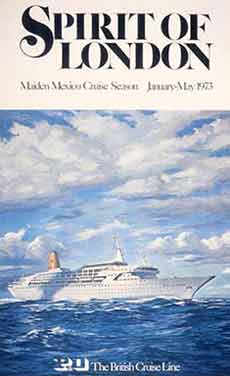 The final tipping point came with a change in the regulations to chartered air services, which made it cheaper to fly than travel by sea. Leisure was now the only option left for the liners, and in the midst of a fuel crisis, even that was financially challenging.

Older ships had grown increasingly expensive to run and P&O turned instead to a new type of vessel - a purpose built cruise ship. Spirit of London was bought on the stocks and launched in 1972 as the Company’s first cruise ship. Despite her British name, the Spirit of London was destined for the growing American market operating out of Los Angeles and cruising to Mexico and Alaska. The new ship was a great success in the US, unlike Arcadia and Canberra which both failed to capture the American imagination. As a safer bet P&O turned, in 1974, to the home-grown, US cruise line Princess Cruises acquiring both the company and two new ships under construction. Spirit of London joined the American fleet as Sun Princess and Princess Cruises went on to take cruising to the small screen, with the ‘Love Boat’ appearing for the first time on US television in 1977.

P&O’s new passenger division had started the decade with a fleet of 22 ships and ended it with seven. All ‘one class’ and solely devoted to leisure, the ships were listed under the new divisional name of P&O Cruises Ltd created in 1977.