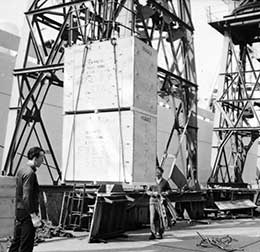 Bulk carriers had the added advantage that shipments of commodities tended to operate on contracts, negotiated for several years and giving a degree of surety on returns. P&O looked to an established operator, Anglo Norness, to form Associated Bulk Carriers in 1964 and the Company’s first bulk carrier Atherstone was launched a year later.

In the general cargo trade, three new ‘super straths’ were ordered to operate a rapid 90-day, round-trip voyage to the Far East from 1967. General cargo was labour intensive and as Anderson was quick to realise containerisation was about to revolutionise not just the way cargo was boxed, loaded and shipped, but the whole business of global trade. 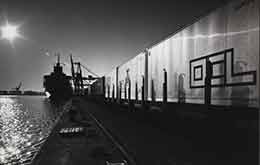 Containerisation had started in America, in the 1950s, as the brainchild of Malcolm McLean, a former road trucker turned logistics mogul. By reducing the need for handling and dock labour, the business of containerisation courted controversy from the outset. OCL came in for plenty of opposition in ports at home and abroad but the box revolution continued unabated. In 1969, five of the six strong ‘Bay’ class containerships were launched for the Europe to Australia run. Each vessel was capable of carrying over 1,500 containers, together they carried as much as 20 existing cargo liners.

OCL had set sail and the world of cargo would never be the same again.