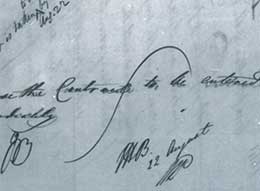 Carrying the Royal Mail had long been the responsibility of Government and particularly the Post Office. For a time, the Admiralty took command, beginning with the Falmouth packet station in 1823. The ‘mail packets’ or sailing ships were notoriously slow and unreliable and as steam power came into force, pressure mounted on the Admiralty to look to commercial ship-owners to operate regular steamer services.

When the Peninsular Steam Navigation Company was awarded the contract for the Iberian mails, on the 22nd August 1837, it was the first of its kind. Crucially the agreement guaranteed the fledgling Company an income of £29,600 per annum (for five years) in return for providing a weekly service to Gibraltar and the principal peninsular ports of Vigo, Oporto, Lisbon and Cadiz.

Don Juan, a wooden paddle steamer of 308 tons owned by Captain Richard Bourne, began the service on 4th September 1837 departing from Falmouth and arriving in Gibraltar just ten days later. It was an auspicious start.

Carrying the mail was to become the mainstay of P&O right up to the Second World War. Not only did successive mail contracts provide a regular income but they guaranteed the Company a virtual monopoly on the routes east of Suez. That was the good part. But as we will see through the decades, the strict rules and onerous conditions attached to the Government contracts often threatened the commercial viability of P&O - particularly in the face of competition.