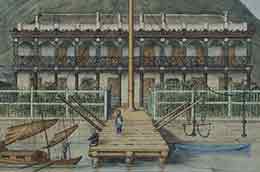 But speed came at a price. Steam power relied on a constant supply of coal which had to be carried on board or shipped from Britain and amassed in depots in strategic ports.

In the 1840s, P&O was rapidly establishing a complex logistics network in Egypt (where passengers and mails had to cross the desert) and East of Suez in Aden, India, Ceylon and China. The operation was masterminded in the Company’s office in London but P&O dispatched Senior Clerks and Agents to set up services locally. Land and buildings were acquired or leased for the Company’s use. Magazon Dock in Bombay was acquired in 1846 and a plot of land in Western part of Hong Kong, on which the Company built an impressive waterfront office. Known locally as ‘tit hong’ the ‘iron house’ gave rise to the Company’s Chinese name.

Empire building was costly and more than once the Company coffers were found wanting. But with so much infrastructure now in place, P&O was strategically poised to monopolise the routes it had pioneered and to become inextricably entwined with the Empire itself.