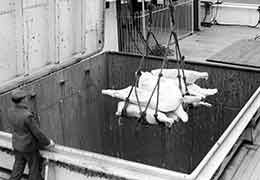 In 1953 P&O launched a new refrigerated liner and acquired a ‘cold storage’ facility in Australia for the export of frozen meat.

After watching the growth in the number of tankers from the side lines, P&O entered the trade in 1955 with an investment of £37million, much of it up front to secure building berths in overcrowded shipyards. The Company was confident that the increasing demand for oil looked set to continue and that, spread amongst the different subsidiary companies of the P&O group, there were plenty of routes to operate on.

By 1958 no fewer than eight ships were under construction (half of the proposed total) and the Company’s first tanker, Maloja, was launched.