Of the five new operating divisions, two, the European, Air and Transport (EA&T) and General Holdings Division, managed the Company’s interests beyond the sea. 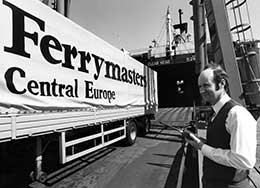 EA&T had consisted of 78 companies prior to restructuring, among them GSNCo and Coast Lines acquired in 1971. Like GSNCo., Coast lines had expanded beyond coastal and short sea shipping into freight forwarding, air freight and road haulage where the company pioneered container haulage operations door-to-door.

Aside from the North of Scotland, (where Coast lines owned the Shetland & Orkney Island service from 1961) Coast Lines‘ traditional routes were to Ireland. With the introduction of ro-ro cargo ships in 1974, the company’s older tonnage was gradually phased out and ‘Pandoro’ was created in 1975 to incorporate Ferrymasters Irish interests with the haulage and freight operations of Coast Lines. With Ireland covered by Pandoro, Ferrymasters concentrated on its continental operations.

Freight and haulage inevitably flowed into warehousing and distribution – an area which the P&O board identified as one to be developed. By the end of the decade, P&O had attached its name to any number of transport and logistics solutions from P&O Roadways to P&O Wine Services

The General holding Division originally included P&O Australia which was formed in 1968 with a remit to look for opportunities in the region and the Pacific Rim. P&O Australia made significant land investments including cold storage operations, islands on the Great Barrier Reef and, more importantly for the company’s long term future, container ports - beginning with Brisbane.

P&O also invested in energy with stakes in various oil fields from the North Sea to the US. There was barely a business in which the Company didn’t hold some sort of interest. But perhaps the most surprising acquisition, given the turbulent history, was Bovis in 1974. As a property, house-building and construction company, Bovis gave P&O a firm footing on land and a counter weight to the peaks and troughs of shipping cycles.