‘The arrival of so huge a leviathan as our steamer, amongst the small craft, caused them to jump about as if for very joy at her coming.’ Albert Hervey, 'The Ocean and the Desert by a Madras Officer', 1846 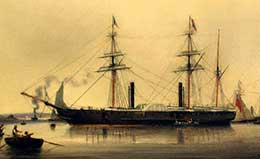 The passage to India required larger ships that could accommodate more coal and bigger engines capable of withstanding the monsoon season in the Indian Ocean.

The first P&O ship to go to India was the Hindostan which left Southampton on 24th September 1842 and arrived in Calcutta 91 days later. Built in Liverpool under the watchful eye of Charles Wye Williams, she was over 2,000 tons and ten times the tonnage of William Fawcett.

Designed for the bimonthly Suez to Calcutta service, Hindostan could accommodate 102 First Class passengers (and their servants) in addition to the mails and cargo. In the interests of passenger comfort, her cabins were placed in the centre of the ship where the effect of pitching and rolling was lessened. Her sister ship Bentinck, launched a year later, boasted cabins with marble-covered basin stands, mirrors, drawers and writing desks together with a ‘gorgeous’ gilded saloon and a well-stocked library.

The new steamers compared well with the aged sailing ships of the East India Company, which limped their way round the Cape and now had little to recommend them. Against even the South-westerly monsoon, Hindostan made the 4,787 mile journey from Calcutta to Suez in 25 days 3 hours.

The advent of this regular and faster service to India excited much interest and plaudits for the ‘vast benefit it bestowed on country and commerce’. Even Queen Victoria was impressed. In July 1849 she requested to visit Hindostan at anchor in Southampton Water, close to Osborne House on the Isle of Wight. P&O were only too happy to oblige.