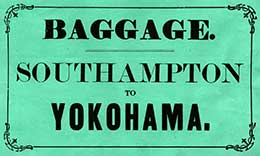 Thomas Sutherland, the Company’s agent in Hong Kong (and later P&O’s Managing Director and longest serving Chairman), first ran a trial service from Shanghai to Nagasaki in 1859 with the steamer Azof. In 1863 Corea* initiated a regular P&O service between Shanghai and Yokohama, in advance of the official mail contract, which was granted four years later.

Yokohama was one of the few Japanese ports in which foreign ships and nationals were permitted to reside. So it was here that the Company first established an office in 1866, occupying a large bungalow in the Naka-Ku area.

P&O continued to have a presence in Japan for over a century.

*Corea was reported lost in a typhoon off Hong Kong on 29th June 1865. The steamer and the 103 passengers and crew on board were never seen again. It was the greatest loss of life the Company had experienced in its first twenty-five years of operation.