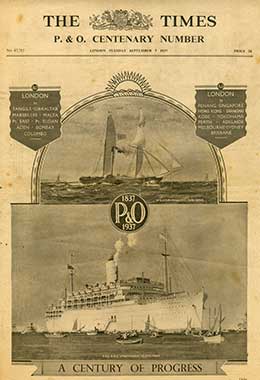 In 100 years, P&O had gone from the first faltering days of coal-powered, steam driven paddle wheels to turbo-electric super liners effortlessly ferrying passengers, mail and cargo across the globe in a vast and varied fleet.

P&O celebrated its century with great pride and events at home and abroad. From Aden to Adelaide there were cocktail parties, receptions and dinners, held in the Company’s honour. A set of centenary paintings was commissioned, together with a souvenir book and a special supplement in The Times which ran to 45 pages. There was a church service in London and a centenary dinner at the Savoy hotel attended by the Chancellor of the Exchequer, the First Sea Lord and a whole host of worthy representatives of the Government, Navy and the shipping industry. As the centenary year coincided with the Coronation of King George VI and Queen Elizabeth, it was only appropriate that P&O’s latest liner Strathmore (launched by the Duchess of York and named after her family) followed the Royal Yacht in the Coronation Naval Review.

P&O had always had a coat of arms, and indeed a motto, but the centenary provided the perfect opportunity to formalise both. A coat of arms was granted by the College of Arms and, with the small addition of ‘nos’, the motto: 'Quis nos separabit' - meaning 'who shall separate us' - was registered as the Company’s own.