With the acquisition of Bovis in 1974, P&O diversified its interests outside shipping for the first time in its history.  It was the sign of things to come and in the face of a hostile bid from Trafalgar House Plc in 1983, salvation lay in further diversification and a merger with Sterling Guarantee Trust.  It was the dawning of a new era for P&O and under the stewardship of Lord Sterling, the Company's interests expanded to encompass a wide variety of non shipping activities as diverse as housebuilding, oil exploration, road haulage, exhibition centres and Barrier Reef resorts.  With the airlines having all but dispensed with liner travel, P&O's passenger fleet was focused on cruising and bulk carriers and containerships replaced the old cargo trades.

In the 1990s, port operations in and around Australia and Logistics became an increasingly important focus for P&O as it divested of many of its 'non core' assets to channel investment in further port developments and remaining shipping and integrated transport-related businesses.  P&O's cruising operations were demerged in October 2000 as an independent company, P&O Princess Cruises, which was later acquired by Carnival Corporation in 2003.  In 2005 P&O’s last interests in the container shipping joint venture, P&O Nedlloyd, was sold to Maersk.

By March 2006, P&O had grown to become one of the largest port operators in the world and together with P&O Ferries, P&O Ferrymasters, P&O Maritime Services, P&O Cold Logistics and its British property interests, the company was, itself, acquired by DP World for £3.3 billion. 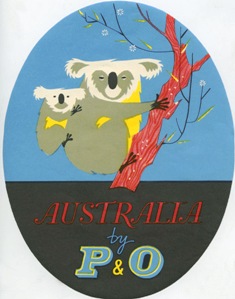 The bulk of archive material belonging to the P&O Company has been placed on permanent loan at the National Maritime Museum, Greenwich, as has material on many of its major shipowning subsidiaries.  The collection is quite comprehensive and includes a variety of material which can be broken down into broad categories.  They included copies of the Royal Charters of Incorporation, deeds, Board Minutes, annual accounts, ships’ voyage ledgers, ships’ timetables, a small number of printed passenger lists, ships’ log book extracts, staff records (both sea and shore) and information regarding passenger ships operated by the company.  It is best to consult the Museum’s catalogue directly to explore the full-range of manuscripts.  Other material relating to P&O can be found at the Australian National Maritime Museum in Sydney, and extensive papers on its celebrated passenger ship Canberra (1961) are at the Ulster Folk & Transport Museum, Belfast, Northern Ireland.

Harcourt, Freda, Flagships of Imperialism: The P&O Company and the Politics of Empire from Its Origins to 1867 (Studies in Imperialism). (Manchester University Press, Manchester, 2006)