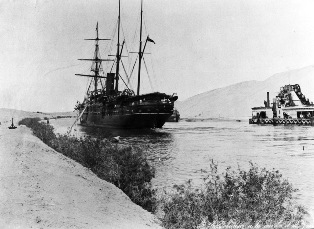 The opening of the Suez Canal in 1869 initially posed difficulties for the P&O Company.  To establish, maintain and improve the so-called ‘Overland Route’ had taken much capital investment, all of which now appeared wasted.  Ships which had been designed for the United Kingdom/Mediterranean or for the Suez/Eastern leg of the service, were not suitable for the whole passage.  Lighthouses had been built in the Red Sea and entire land based facilities, required for the operation, maintenance and supply of vessels and passengers (including fruit, vegetable and sheep farms), were rendered redundant, almost immediately with the opening of the Suez Canal.  P&O, having created for itself a virtual monopoly in the area, found itself in competition with every ship owner who, with minimum organisation and a negligible amount of capital, could pass through Suez to the east as quickly and easily as themselves.  The financial consequences were such that for a period the future existence of the whole enterprise appeared to hang in the balance, an uncomfortable state of affairs greatly exacerbated by the fact that, the two principal founders having died in the 1860s, the managing direction of the Company was in need of a new head at the helm.

Thomas Sutherland (1834-1922) is widely seen as the one whose hand steadied the Company and guided it through these difficult years.  Sutherland enjoyed a glittering career with the P&O Company, which he joined as a youth in 1852.  Sent east in 1854, first, briefly, to Bombay and then to Hong Kong, he seems quickly to have made his mark.  By the time he was 26 years of age he had become superintendent of the Company’s Japan and China age 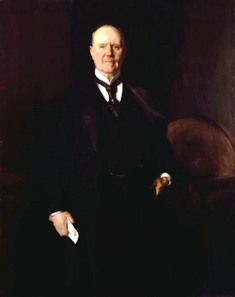 ncies, had been appointed a member of the Hong Kong legislative assembly and, in a short time, had become a figure of great influence in the commercial life of the Far East.  Recalled to London in 1866 by the ageing Anderson, Sutherland was then sent off on a tour of inspection of the Company’s whole operation, evidently with a view to assessing how it might best counter the likely effects of the new waterway at Suez, then nearing completion.  Promoted to Assistant Manager in 1868 and Managing Director in 1872, Sutherland proposed and presided over a drastic re-organisation of the Company’s undertakings.  He initiated a heavy programme of new building to replace the obsolescent tonnage, financed by a comprehensive series of cost cutting.  As a result of measures at home and abroad P&O's home port was again relocated from Southampton to London.

Sutherland's strict measures and his astute grasp of emerging trends, underpinned the long prosperous swing of consolidation and advancement in the P&O fleet which followed.  Appointed Chairman in 1880, elected Liberal MP for Greenock in 1884 and knighted in 1891, Sir Thomas Sutherland was undoubtedly a Victorian of the greatest ability and acumen for business.  In a period when the scholarly literature is polluted with references to entrepreneurial failure, the P&O Company under his stewardship rose to a position of great power and influence in international shipping.